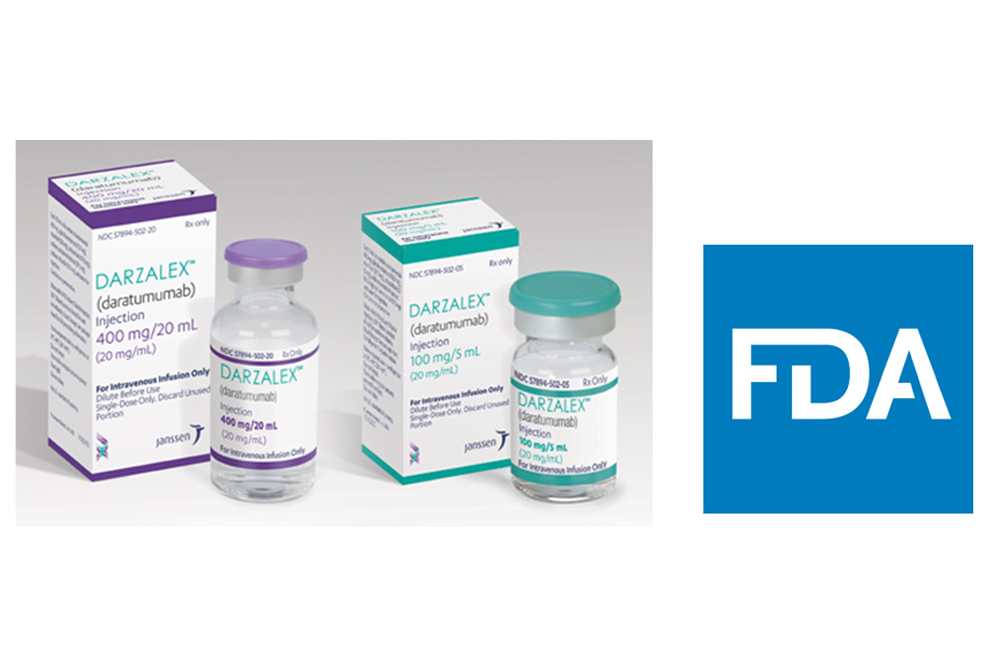 The submission is supported by data from the Phase 3 COLUMBA (MMY3012) study first presented at the American Society of Clinical Oncology (ASCO) Annual Meeting that included a non-inferiority comparison to DARZALEX IV administration for co-primary endpoints of overall response rate and maximum Ctrough concentration. Data from the Phase 2 PLEIADES (MMY2040) study are also included in the BLA. The subcutaneous formulation of DARZALEX is co-formulated with recombinant human hyaluronidase PH20 (rHuPH20) [Halozyme's ENHANZE® drug delivery technology].

"This submission represents our commitment to develop innovative treatment options for people living with multiple myeloma," said Craig Tendler, M.D., Vice President, Clinical Development and Global Medical Affairs, Oncology, Janssen Research & Development, LLC. "The DARZALEX subcutaneous formulation showed non-inferiority to the existing IV formulation, both as a monotherapy and in combination with common background therapies, while administered with a considerably shorter infusion time. We look forward to working closely with the FDA in their review of the data supporting this regulatory application."

Today's submission follows two recent milestones for the DARZALEX intravenous formulation, including an approval of DARZALEX in combination with lenalidomide and dexamethasone for the treatment of newly diagnosed, transplant ineligible patients with multiple myeloma supported by the Phase 3 MAIA study, and Priority Review designation following submission of a supplemental BLA based on the Phase 3 CASSIOPEIA study, which is seeking approval of DARZALEX in combination with bortezomib, thalidomide and dexamethasone for newly diagnosed patients with multiple myeloma who are transplant eligible.

The non-randomized, open-label, parallel assignment Phase 2 PLEIADES study included 240 adults either newly diagnosed or with relapsed or refractory multiple myeloma. Patients with newly diagnosed multiple myeloma were treated with 1,800 mg of the SC formulation in combination with either bortezomib, lenalidomide and dexamethasone (D-VRd) or bortezomib, melphalan, and prednisone (D-VMP). Patients with relapsed or refractory disease were treated with 1,800 mg of the SC formulation plus lenalidomide and dexamethasone (D-Rd). The primary endpoint for the D-VMP and D-Rd cohorts was overall response rate. The primary endpoint for the D-VRd cohort was very good partial response or better rate. An additional cohort of patients with relapsed and refractory multiple myeloma treated with daratumumab plus carfilzomib and dexamethasone was subsequently added to the study.

DARZALEX® (daratumumab), the first CD38-directed antibody approved anywhere in the world, is the only CD38-directed antibody approved to treat multiple myeloma.3 CD38 is a surface protein that is present in high numbers on multiple myeloma cells, regardless of the stage of disease.4 DARZALEX binds to CD38 and inhibits tumor cell growth causing myeloma cell death.3 DARZALEX may also have an effect on normal cells.3 DARZALEX is being evaluated in a comprehensive clinical development program across a range of treatment settings in multiple myeloma, such as in frontline and relapsed settings.5,6,7,8,9,10,11,12 Additional studies are ongoing or planned to assess its potential in other malignant and pre-malignant hematologic diseases in which CD38 is expressed, such as smoldering myeloma.13,14

Multiple myeloma is an incurable blood cancer that affects a type of white blood cell called plasma cells, which are found in the bone marrow.21,22 When damaged, these plasma cells rapidly spread and replace normal cells with tumors in the bone marrow.22,23 In 2019, it is estimated that more than 32,000 people will be diagnosed, and nearly 13,000 will die from the disease in the United States.23 While some patients with multiple myeloma have no symptoms, most patients are diagnosed due to symptoms, which can include bone fracture or pain, low red blood counts, tiredness, high calcium levels, kidney problems or infections.24

DARZALEX® (daratumumab) is contraindicated in patients with a history of severe hypersensitivity (eg, anaphylactic reactions) to daratumumab or any of the components of the formulation.

Pre-medicate patients with antihistamines, antipyretics, and corticosteroids. Frequently monitor patients during the entire infusion. Interrupt infusion for reactions of any severity and institute medical management as needed. Permanently discontinue therapy if an anaphylactic reaction or life-threatening (Grade 4) reaction occurs and institute appropriate emergency care. For patients with Grade 1, 2, or 3 reactions, reduce the infusion rate when re-starting the infusion.

Interference With Serological Testing – Daratumumab binds to CD38 on red blood cells (RBCs) and results in a positive Indirect Antiglobulin Test (Indirect Coombs test). Daratumumab-mediated positive indirect antiglobulin test may persist for up to 6 months after the last daratumumab infusion. Daratumumab bound to RBCs masks detection of antibodies to minor antigens in the patient's serum. The determination of a patient's ABO and Rh blood type are not impacted. Notify blood transfusion centers of this interference with serological testing and inform blood banks that a patient has received DARZALEX®. Type and screen patients prior to starting DARZALEX®.

Interference With Determination of Complete Response – Daratumumab is a human IgG kappa monoclonal antibody that can be detected on both the serum protein electrophoresis (SPE) and immunofixation (IFE) assays used for the clinical monitoring of endogenous M-protein. This interference can impact the determination of complete response and of disease progression in some patients with IgG kappa myeloma protein.

About the Janssen Pharmaceutical Companies of Johnson & Johnson

At Janssen, we're creating a future where disease is a thing of the past. We're the Pharmaceutical Companies of Johnson & Johnson, working tirelessly to make that future a reality for patients everywhere by fighting sickness with science, improving access with ingenuity, and healing hopelessness with heart. We focus on areas of medicine where we can make the biggest difference: Cardiovascular & Metabolism, Immunology, Infectious Diseases & Vaccines, Neuroscience, Oncology, and Pulmonary Hypertension.