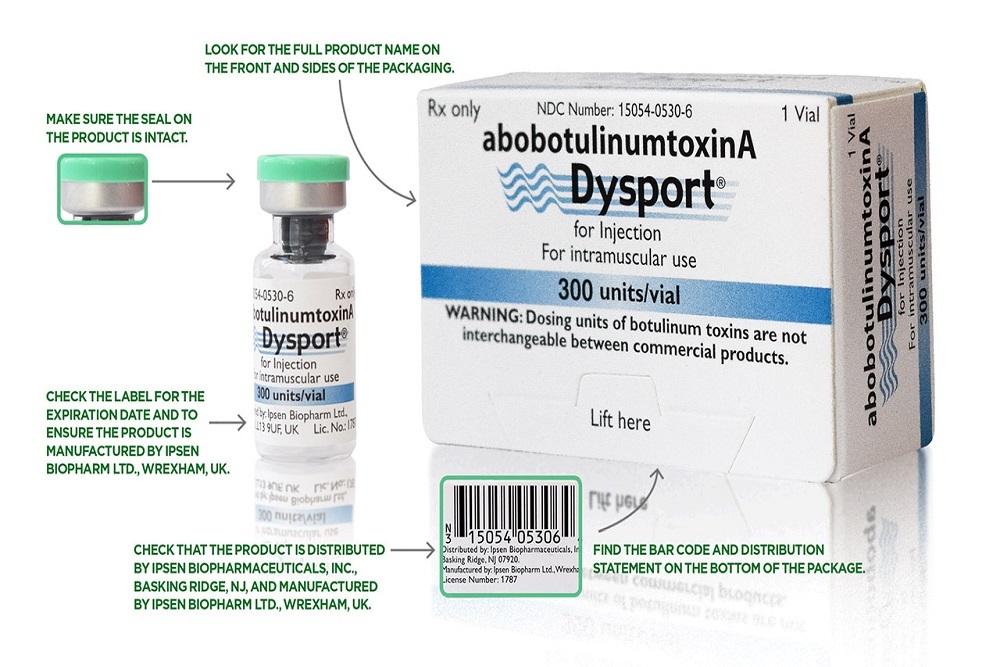 Ipsen Biopharmaceuticals, an affiliate of Ipsen (Euronext: IPN; ADR: IPSEY), announced today that the United States Food and Drug Administration (FDA) has expanded the use of Dysport® (abobotulinumtoxinA) for injection to include the treatment of upper limb spasticity in children two years of age and older, excluding spasticity caused by cerebral palsy (CP). This approval makes Dysport the first botulinum toxin approved by the FDA for both pediatric spasticity indications, following the previous approval to treat children with lower limb spasticity aged two and older received in July 2016.

“For physicians, it is reassuring to have a botulinum toxin treatment in Dysport which demonstrated sustained symptom relief for spasticity, which can be physically challenging for children,” said Ann Tilton, MD, study investigator and Professor of Clinical Neurology at the Louisiana State University Health Sciences Center New Orleans. “This FDA decision for Dysport means we now have an approved therapy to offer children and adolescents seeking improvements in mobility in both upper and lower limbs.”

The approval is based on a Phase 3 study with children aged two to 17 years old being treated for upper limb spasticity.1 Due to Orphan Drug Exclusivity, this approval excludes use in children with upper limb spasticity caused by CP. Dysport demonstrated statistically significant improvements from baseline at Week 6 with doses of 8 Units/kg and 16 Units/kg vs. 2 Units/kg, as measured by the Modified Ashworth Scale (MAS) in the elbow or wrist flexors.1 Dysport demonstrated a reduction in spasticity symptoms through 12 weeks for most children for both upper and lower limbs.1 In the upper limb study, a majority of patients were retreated between 16-28 weeks; however, some patients had a longer duration of response (i.e., 34 weeks or more).1 The most frequent adverse reactions observed were upper respiratory tract infection and pharyngitis.1

Dysport and all botulinum toxin products have a Boxed Warning, which states that the effects of the botulinum toxin may spread from the area of injection to other areas of the body, causing symptoms similar to those of botulism.1 Those symptoms include swallowing and breathing difficulties that can be life-threatening.1 Dysport is contraindicated in patients with known hypersensitivity to any botulinum toxin preparation or to any of the components; or in the presence of infection at the proposed injection site(s); or in patients known to be allergic to cow’s milk protein.1 The potency Units of Dysport are specific to the preparation and assay method utilized.1 They are not interchangeable with other preparations of botulinum toxin products.1 Please see below for additional Important Safety Information.

Spasticity affects more than an estimated 12 million people worldwide and is a condition in which there is an abnormal increase in muscle tone or stiffness, which may interfere with movement and particularly impacts growing children.2,3 Treatment with injectable medications, including Dysport, have shown to be effective in relieving the symptoms associated with spasticity in the arms and legs among children.2

Spasticity is a condition in which there is an abnormal increase in muscle tone or stiffness in one or more muscles, which might interfere with movement.3

Spasticity affects the muscles and joints of the extremities, and particularly impacts growing children.2 Spasticity is usually caused by damage to nerve pathways in the brain or spinal cord that control muscle movement, and may occur in association with CP, spinal cord injury, multiple sclerosis, stroke, and brain or head trauma.2,3

Spasticity in children is a condition that causes muscle spasms and increased muscle stiffness in either the upper and/or lower limbs including the elbow, wrist, finger and calf muscles.1 When muscle stiffness in the calf is intensified, it prohibits the ankle from flexing as needed and causes the foot to be pointed down and in.1,4

About the Phase 3 Pivotal Study

Dysport was evaluated in a Phase 3, randomized, double-blind, low-dose controlled, multicenter study that included a total of 210 children treated, aged two to 17 years, for upper limb spasticity.1 Patients with a MAS of grade 2 or greater at the primary targeted muscle groups (PTMG) were enrolled and received doses of Dysport at 8 Units/kg (n=70), 16 Units/kg (n=70) or 2 Units/kg (n=70) injected into the PTMG (elbow flexors: brachialis and brachioradialis; wrist flexors: flexor carpi radialis, and flexor carpi ulnaris).1 After the initial treatment, up to three further treatments of Dysport could be administered at planned doses of either 8 Units/kg or 16 Units/kg, or titrated up or down according to investigator judgement.1

Dysport showed statistically significant improvements from baseline in MAS in the PTMG at Week 6, the primary endpoint, with doses of 8 Units/kg and 16 Units/kg compared to low dose Dysport (2 Units/kg) (-2.0, -2.3 and -1.6, respectively).1 A total of 208 patients were included in this assessment as part of the modified intent to treat (mITT) population.1 Higher dose Dysport received a +2.0 Physician Global Assessment (PGA) score, though there was no statistically significant difference in mean PGA (2.0, 2.0 and 1.8, respectively) or mean Goal Attainment Scale (GAS) (52.6, 52.6 and 52.1, respectively).1

In the upper limb study, a majority of patients were retreated between 16-28 weeks; however, some patients had a longer duration of response (i.e., 34 weeks or more).1

A pediatric assessment for Dysport demonstrates that Dysport is safe and effective in another pediatric population. However, Dysport is not approved for such patient population due to marketing exclusivity for another botulinum toxin.1

About Dysport® (abobotulinumtoxinA) for Injection

Dysport® (abobotulinumtoxinA) for injection is indicated for the treatment of:

Postmarketing reports indicate that the effects of Dysport and all botulinum toxin products may spread from the area of injection to produce symptoms consistent with botulinum toxin effects. These may include asthenia, generalized muscle weakness, diplopia, blurred vision, ptosis, dysphagia, dysphonia, dysarthria, urinary incontinence, and breathing difficulties. These symptoms have been reported hours to weeks after injection. Swallowing and breathing difficulties can be life threatening and there have been reports of death. The risk of symptoms is probably greatest in children treated for spasticity, but symptoms can also occur in adults treated for spasticity and other conditions, particularly in those patients who have underlying conditions that would predispose them to these symptoms. In unapproved uses and in approved indications, cases of spread of effect have been reported at doses comparable to or lower than the maximum recommended total dose.

Dysport is contraindicated in patients with known hypersensitivity to any botulinum toxin products, cow’s milk protein, components in the formulation or infection at the injection site(s). Serious hypersensitivity reactions including anaphylaxis, serum sickness, urticaria, soft tissue edema, and dyspnea have been reported. If such a reaction occurs, discontinue Dysport and institute appropriate medical therapy immediately.

The potency Units of Dysport are specific to the preparation and assay method utilized. They are not interchangeable with other preparations of botulinum toxin products, and, therefore, units of biological activity of Dysport cannot be compared to or converted into units of any other botulinum toxin products assessed with any other specific assay method.

Treatment with Dysport and other botulinum toxin products can result in swallowing or breathing difficulties. Patients with pre-existing swallowing or breathing difficulties may be more susceptible to these complications. In most cases, this is a consequence of weakening of muscles in the area of injection that are involved in breathing or swallowing. When distant side effects occur, additional respiratory muscles may be involved. Deaths as a complication of severe dysphagia have been reported after treatment with botulinum toxin. Dysphagia may persist for several weeks, and require use of a feeding tube to maintain adequate nutrition and hydration. Aspiration may result from severe dysphagia and is a particular risk when treating patients in whom swallowing or respiratory function is already compromised. Patients treated with botulinum toxin may require immediate medical attention should they develop problems with swallowing, speech, or respiratory disorders. These reactions can occur within hours to weeks after injection with botulinum toxin.

Individuals with peripheral motor neuropathic diseases, amyotrophic lateral sclerosis, or neuromuscular junction disorders (e.g., myasthenia gravis or Lambert-Eaton syndrome) should be monitored particularly closely when given botulinum toxin. Patients with neuromuscular disorders may be at increased risk of clinically significant effects including severe dysphagia and respiratory compromise from typical doses of Dysport.

This product contains albumin, a derivative of human blood. Based on effective donor screening and product manufacturing processes, it carries an extremely remote risk for transmission of viral diseases and variant Creutzfeldt-Jakob disease (vCJD). There is a theoretical risk for transmission of Creutzfeldt-Jakob disease (CJD), but if that risk actually exists, the risk of transmission would also be considered extremely remote. No cases of transmission of viral diseases, CJD, or vCJD have ever been identified for licensed albumin or albumin contained in other licensed products.

The possibility of an immune reaction when injected intradermally is unknown. The safety of Dysport for the treatment of hyperhidrosis has not been established. Dysport is approved only for intramuscular injection.

There are no adequate and well-controlled studies in pregnant women. Dysport should be used during pregnancy only if the potential benefit justifies the potential risk to the fetus. Based on animal data, Dysport may cause fetal harm.

The safety and effectiveness of Dysport injected into proximal muscles of the lower limb for the treatment of spasticity in pediatric patients has not been established. Based on animal data Dysport may cause atrophy of injected and adjacent muscles; decreased bone growth, length, and mineral content; delayed sexual maturation; and decreased fertility.

In general, elderly patients should be observed to evaluate their tolerability of Dysport, due to the greater frequency of concomitant disease and other drug therapy. Subjects aged 65 years and over who were treated with Dysport for lower limb spasticity reported a greater percentage of fall and asthenia as compared to those younger (10% vs. 6% and 4% vs. 2%, respectively).

About Ipsen in North America

Ipsen (Euronext: IPN; ADR: IPSEY) is a global biopharmaceutical company focused on innovation and specialty care. The company develops and commercializes innovative medicines in three key therapeutic areas – Oncology, Neuroscience and Rare Diseases. At Ipsen, we focus our resources, investments and energy on discovering, developing and commercializing new therapeutic options to provide hope for patients whose lives are challenged by difficult-to-treat diseases. Ipsen’s North American operations are located in Cambridge, Massachusetts, one of the company’s three global hubs. Based in the heart of Kendall Square, our fully integrated biopharmaceutical business includes Commercial, Research & Development, Manufacturing, and Global External Innovation and Partnering. Combined with our Canadian headquarters in Mississauga, Ontario, and other locations, Ipsen employs approximately 600 people in North America. For more information please visit www.ipsenus.com or www.ipsen.ca. Connect with us on Twitter and LinkedIn.

Ipsen is a global specialty-driven biopharmaceutical group focused on innovation and specialty care. The group develops and commercializes innovative medicines in three key therapeutic areas – Oncology, Neuroscience and Rare Diseases. Its commitment to Oncology is exemplified through its growing portfolio of key therapies for prostate cancer, neuroendocrine tumors, renal cell carcinoma and pancreatic cancer. Ipsen also has a well-established Consumer Healthcare business. With total sales over €2.2 billion in 2018, Ipsen sells more than 20 drugs in over 115 countries, with a direct commercial presence in more than 30 countries. Ipsen’s R&D is focused on its innovative and differentiated technological platforms located in the heart of the leading biotechnological and life sciences hubs (Paris-Saclay, France; Oxford, UK; Cambridge, US). The Group has about 5,700 employees worldwide. Ipsen is listed in Paris (Euronext: IPN) and in the United States through a Sponsored Level I American Depositary Receipt program (ADR: IPSEY). For more information on Ipsen, visit www.ipsen.com.